As far back as I can remember, I’ve always wanted to create my own stories.

When I was young, I used to play with these G.I. Joe Action Force figures that I absolutely loved.

I had created a word document on my dad’s old PC, where I had listed all the figures I had. In that document I had given them new names, background information, and who was connected to who. Making them real characters. When I later had my play-sessions, it always acted out like an episode, so the next time I played, the story continued from where I had left off. I always spoke English when playing, because it didn’t sound cool speaking Swedish (you know what I’m talking about).

I was 8 years old when I watched the movie Alien for the first time and shortly after I watched Demolition Man (my mom’s friend used to record these movies from cable TV, and give me VHS tapes – she was awesome). So at that point, I had been exposed to something so much cooler than the shitty kiddies shows on TV. It wasn’t until Batman TAS I started watching cartoons again. Then came X-Men TAS & Spiderman TAS, and my interest in comics was born.

The play-sessions went on for years, and sometimes I faked the death of a figure, to have him return several weeks later, surprising the other figures. Sometimes I had a figure leave the good guys and join the bad guys, and vice versa. At this point I was trying to catch the awesomeness I got from watching movies.

Unfortunately I lost all of my beloved figures when I grew up . . . So that’s why I bought them all again! 🙂

PS. I’m a grown ass man: I can play with toys how much I want.

PSS. My girlfriend thinks our future children will get to play with these. YEAH RIGHT, like I would let that happen. 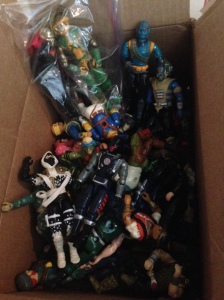 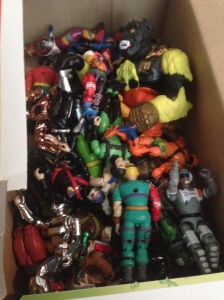 4 thoughts on “How it all started”